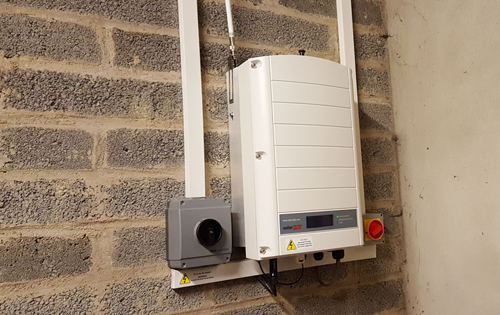 The inverter often also acts as a monitoring system, connecting to the internet and uploading the performance data for viewing in a web browser.

Solar Inverters are the most likely component in the solar panel system to have technical issues and one of the most expensive to replace. Because of this it is vital to choose:

Issues that are less important than the above but are often used as selling points are the inverters start-up voltages and inverter efficiencies. In a high quality inverter these will always be very good even if the data sheets of a less established inverter manufacturer shows better figures. Any technical differences like this are normally minimal and not worth considering when making a decision - far better to go with an proven manufacturer with a good reputation for realiable, quality inverters.

Exeo Energy staff have many year of experience working with inverter manufacturers and can help you to choose the best inverter for you and your property.

In the majority of grid-connected systems the inverter will shut the solar panels down if there is a power cut to prevent any electricity being exported which could cause a safety issue to any engineers who are trying to fix the power cut. Because of this most solar panels will not work in a power cut. It is possible to design systems that are grid connected and can also work in a power cut but these systems require additional components and a there is normally a significant increase in the cost of the solar panel system.

There are four main types of solar inverter used in grid-connect systems:

Both the power optimisers and the micro-inverters require electronics to be roof mounted and although they have good warranties there is a small chance of issues. Therefore if the panels are mounted in a location that is particularly difficult to access in future it makes sense to avoid either of these technologies and to stick to the simpler string inverter.

Based on our many years of experience in the solar photovoltaic industry we have our prefered manufacturers that we tend to use in most situations because we know they are reliable, will work well for years to come, are productive and have great UK based support.